The London Apartments - Dialogue Of One [sis05] 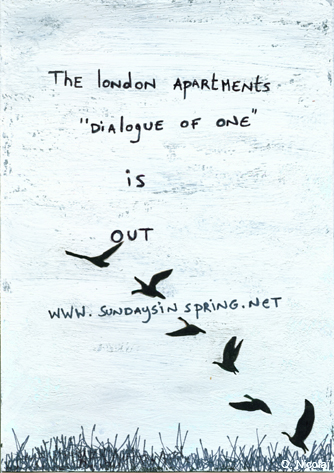 The London Apartments - Dialogue Of One [sis05]

by
The London Apartments

one thing we can be sure is that the music you will hear clearly belongs to the twenty first century. there are some touches of indietronica, atmospheres of dreampop, and sincerity of intimate emoish songwriting. just sit down on your back, look at the starry sky and start to fly with your blurry eyes.

bio:
justin langlois and erin fortier are the two folk behind the london apartments. embracing technology alongside bedroom pop songwriting ethics, the london apartments' eyes light up under the glow of computer screen and delay pedal LEDs, while their hands fill with guitar and synth surrounded with glitchloops and drum-machine rhythms. close your eyes and breathe in these sounds.

release notes:
this collection was recorded as summer was winding down and the air was becomming crisp in a small bedroom in the county of southern ontario. weeks of romance and nights spent on children's playgrounds under stars shaped these sounds into the songs they are. as time would have her way with the youth in love, these weeks lifted off the ground and flew faster than the wind would blow. september began a new start to a dying season, but it was the most beautiful time in memory. finishing touches were gently placed onto the songs and called complete as the first leaf changed from green to orange falling ever-so softly kissing her cheek.

Album
Dialogue of One

Reviewer: Margarete Elisabeth - favoritefavoritefavorite - August 12, 2012
Subject: Nice
The piano work is nice. A mix of very languid and mellow, yet at the same time somewhat upbeat. Dreamy and coarse; a little of a study in opposites.

Reviewer: dr carruthers - favoritefavoritefavoritefavorite - April 17, 2007
Subject: Not bad
A promising record. They work with genre-clichés, but do it well, and also they add their own ideas.
Circuit is the best song, but the overall effect is very pleasent.

i love your music, the sense you put in it, the melodies, the production ! good !
we want you on our free music stream et download archive : http://musique-libre.org : http://www.musique-libre.org/static.php?op=musiqueIndex.php&npds=-1

i find your mail and write you !

Uploaded by sundaysinspring on November 8, 2004